Pokémon Go was released a little less than two weeks ago and it is already the most reported subject in the history of Google.  I am a Millennial, and like many Millennials out there, we were the first to learn of these mythical creatures almost 20 years ago.  We have all dreamed of one day capturing them all.  Today, that dream is almost a reality.  These little pocket monsters simply show up in front of us when we turn on our phones!

But, the question now is how do we really capture ALL OF THEM?  Sure, there are ways to travel within your country to catch as many as possible.  Experts say that you have a higher chance of catching water Pokémon near bodies of water, fire Pokémon near the desert, and some Pokémon are just everywhere.  If I see another Rattata...

But how do you capture the truly rare ones...like a Shiny?

What is a Shiny?
Shinnies first appeared in Generation II, Gold and Silver.  From my limited knowledge, shinnies are extremely rare Pokémon that appear as a different color from the regular Pokémon, for example a green Rattata or...a gray Jigglypuff.  These can be caught either in the wild or by cross-breeding internationally through the Masuda Method (appropriately named in Japanese: 国際結婚 international marriage).  The chances of catching them in the wild is about 1 out of 8192 in the older games.  However, tech blogs are hinting that these will be available in Pokémon Go.

The Masuda Method
The Masuda Method appeared in Generation IV (2007 - Diamond, Platinum, Pearl - way after my time), named after Junichi Masuda, the Game Freak director who inserted the method into Diamond and Pearl.  The Masuda Method requires the breeding of two Pokémon of different genders and from different regions (the game recognizes this by registering the different language of the Pokémon's name).  This method increased the likelihood of getting a shiny by SIX TIMES.

If this method is to work in Pokémon Go, we would need to not only implement trading between players of the same country but also to enable players to trade internationally and to catch Pokémon all over the world.  With the way this game is developing, this feature just might be a reality sooner than we think. 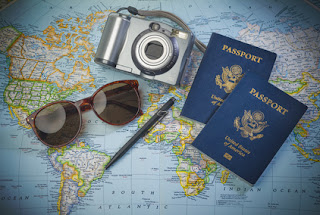 If the need for international travel becomes a reality in this game, the U.S. Department of State provides a number of visas to travel to the U.S. with plenty of time to travel through the country and catch all the Pokémon with English names you need.

Visa Waiver Program
The Visa Waiver Program allows visitors from certain countries to travel to the U.S. without obtaining a visa, as long as they obtain approval from the Electronic System for Travel Authorization (ESTA).  Visitors from qualified countries can visit for tourism or business reasons for up to 90 days!  As such, visitors from countries such as South Korea, Italy, Japan, and Singapore can visit the U.S. with very little government-mandated travel preparation.  See the Department of State's website for more information and for a complete list of countries qualifying for the VWP.  However, the same legal requirements under B-1 (business) and B-2 (tourism) visas apply; most importantly, the foreign national must prove non-immigrant intent.  So, you should speak with an immigration attorney regarding which facts would show that your stay in the U.S. is only temporary.

Visitor's Visas
If your home country is not listed as a VWP country, you can still enter and stay in the U.S. for up to 90 days.  For more information, visit our website.  If you ultimately discover that you need more time to catch all the Pokémon in the country, you can file I-539 to extend your stay.  However, both the length of extended stay and the approval of your extension request are subject to the adjudicator's discretion.  As such, we would highly advise that you have an alternative reason for the extension request, perhaps something other than that you need more time to catch them all, however pressing that task may be.


Disclaimer: This post is for firm marketing purposes only. The poster does not claim to be an expert in the game Pokémon Go in any way and apologizes for any misstatement in the functionality of the game. However, we welcome comments to correct any misstatements or any thoughts on the post.

Zhang-Louie, Immigration Legal Counsel is a semi-virtual immigration law practice in Cambridge, Massachusetts. We advise startups on hiring and retaining global talent so that they can focus on growing their business.